Cayo Coco is located at the midpoint of Cuba’s north coast, (it is 270 mls E of Havana. 65 mls N of the provincial capital of Ciego de Avila and its international airport). It is the Westernmost of the large “cays”, some 400 islands stretching for 186 mls from Santa Lucia in the south east and forming the Sabana Camaguey Archipelago (also known as Jardines del Rey).

Cuba lies in the northwest of the Caribbean Sea, 90 miles south of Florida, at the mouth of the Gulf of Mexico. Almost the size of England, it is by far the largest island in the Caribbean – in fact, at 744 miles long by an average 60 miles wide, it’s as big as all the rest put together. 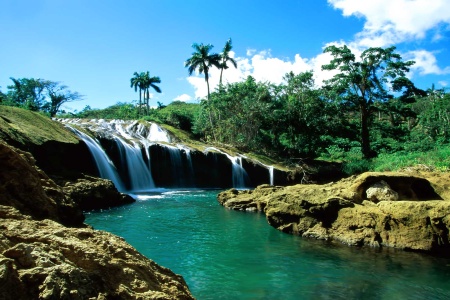 To Columbus it was also the best: he called it “the most beautiful land yet seen by human eye”. END_OF_DOCUMENT_TOKEN_TO_BE_REPLACED

Antigua, together with its sister islands Barbuda and Redonda, is part of the Leeward Islands group in the north-east Caribbean. Scenically, it’s not as immediately appealing as some of the other islands – as the plane comes in to land the interior looks quite flat, dry and parched. However, even from hundreds of feet up you can see, all round the coastline, indented with numerous coves and harbours, stretches of glorious white sand. It’s these fabulous beaches – some of the best in the Caribbean – that are the island’s main draw. Holiday brochures often speak of Antigua as not so much an island with beaches, but more of ‘a beach with an island in the middle.’

The tourist board likes to point out that Antigua has 365 beaches, ‘one for every day of the year’ – and one of them, they say, is the only beach at which Queen Elizabeth ever went into the sea. Whether or not the exact number is correct, it’s certainly true that you’ll be in absolute bliss on the sunbathing front.

Antigua’s beaches are the stuff desert island dreams are made of – all gleaming white sand, swaying palm trees and sparkling seas in several shades of blue. And because there are so many of them, finding a secluded stretch is never much of a problem. The north-western corner of the island is where most resorts and hotels are, stretching between Dickenson Bay and Four Islands Harbour.

The south coast, especially round Falmouth and English Harbour, is where the yachting fraternity hang out. Resorts elsewhere on the island tend to be more secluded. Most hotels offer a good range of water sports, including snorkelling, scuba diving, windsurfing, water-skiing and sailboating.

Antigua & Barbuda is also famous for its sailing – it holds a big regatta every spring and smaller ones throughout the year. You can charter yachts for days at a time to tour some of the neighbouring islands, or hire a boat for a day’s deep sea fishing.

As well as being ideally suited as a tropical playground, Antigua is also one of the more historically interesting of the Caribbean islands. In the 18th century, the island was an important naval base for the British, harbouring the fleet that helped defend British interests in the Caribbean.

Following the volcanic eruptions on the nearby island of Montserrat in the late 1990s, much of the population was evacuated, and many are now resident in Antigua.